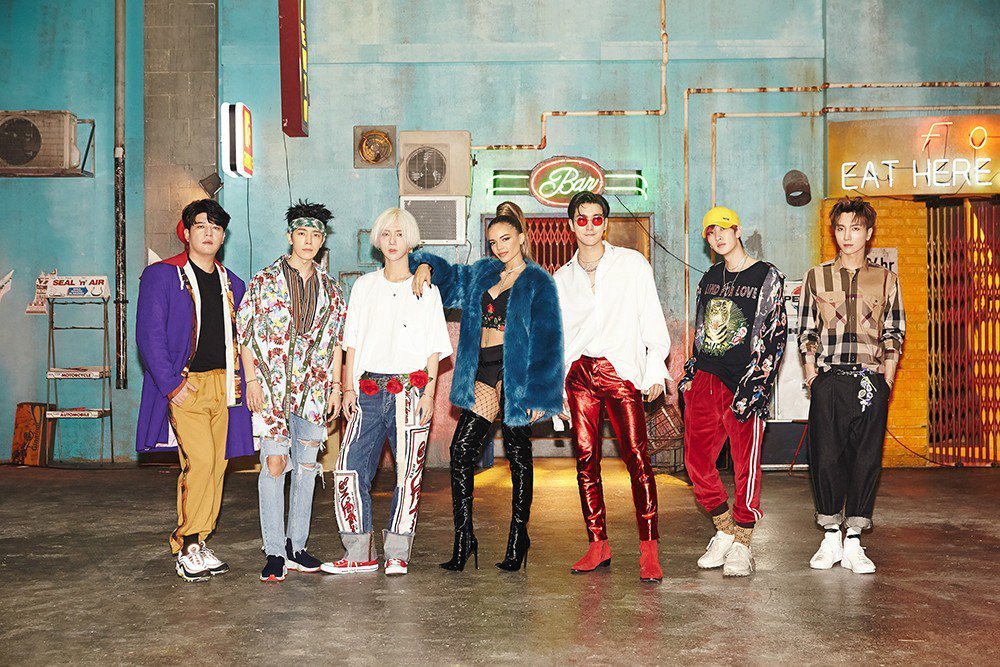 Super Junior is back with a Latin-pop track featuring Leslie Grace called ‘Lo Siento’ (in English – I’m Sorry). The new MV launched on April 12th.  In just 24 hours it has accumulated more than 5 million views on YouTube. T

he multilingual track distinguishes itself with Leslie Grace singing in Spanish and the rest of Super Junior chiming in Korean/English. Below is a breakdown on why ‘Lo Siento’ is the one of the best K-pop collab song so far.

In the first minute, the sound of the guitar mixed with tropical rhythm makes you feel you are part of a Latin fiesta. The chorus makes you want to stop whatever you are doing and dance along with Super Junior and Leslie Grace.

From the tones of each member singing, there is sensuality and a hint of mystery. The part where the bass drops and someone is saying “Dadada-bombom…” is the perfect segue towards the rap parts. Overall, the beat makes us want to go to a fiesta/party!

The flower theme is perfect for the Latin-inspired track and gives a summery vibe.The MV displays bold colors of red, blue, yellow, white, etc. The production set with the colorful building, food stall sign, and snow gives it an underground vibe. The red, orange and yellow background where everyone is dancing instantly captures your eye.

Whoever was the boys’ stylist did an amazing job on each member’s outfits. Donghae’s multi-colored striped button-up and blue/yellow flowered pants stood out in addition to his blue headband.  Yesung’s black button up with large red flowers also make a bold statement. Leslie Grace’s outfits with the blue and yellow furry jacket and her thigh-high leather boots were sexy.

Leeteuk’s orange suit with a light blue flower patterned button up made him look suave as he enticed the model. Eunhyuk’s pink locks make him look like a bad boy as he sits on the bed with the sleeping model. Shindong’s appearance at the bar wearing the zebra patterned blazer and flowery button-up captures your eye. Sadly, Heechul is still recovering from an injury but his first appearance with the guitar set the tone of the MV.

Their choreography in all honesty is not one of their best choreos since their debut. However, Super Junior and Leslie Grace throughout the MV were seducing us with their moves.  In the MV the members and Leslie Grace make it upbeat and sensual.

Their choreo has a lot of body rolls, hip thrusts/shaking, and elements of salsa or other Latin dance moves. When they performed with KARD on the comeback stage, Somin and Jiwoo did a great job at executing the simple choreo.

“Lo siento” means “I’m Sorry” and the track was co-written by Heechul, Eunhyuk  and Leslie Grace. The verses and chorus talk about courting, kissing and dancing with the group’s person of affection. The Spanish and Korean words blurred together which made it sound like everyone was speaking one language. Leslie Grace’s verses of Spanish flowed really well with Super Junior’s Korean/English lines.

When Yesung and Leslie Grace harmonized together, their voices beautifully matched each other. When Heechul and Eunhyuk rapped, their voices sounded very melodic and loved the lines in English translation “Medusa’s eyes, I’m hard as stone, you burn like the fireworks”.

From the comments on the MV, many of the Spanish fans loved the song and this collab shows music transcends past cultural differences. Super Junior, Leslie Grace and the team of SM Town company produced an inspiring and bold track for the international K-pop fanbase.

Very Kpop Shop has the latest Super Junior merch at verykpop.com. Tell us your thoughts on SJ’s comeback this year. Watch the ‘Lo Siento’ MV on YouTube.